These tips will work for authors, bloggers, columnists and journalists.

As a blogger, one of the biggest concerns you will have is finding images online that you can use without any trouble with the law. This becomes an even bigger problem if you don’t have the design chops to create images yourself. Bohemea is a cautionary tale for bloggers who used photographs without consent of […]
Read More:http://www.bloggingpro.com/?p=32186

First impressions are a one-shot deal. For email marketers, they only come once in an inbox. Here’s how not to blow that all-important initial email contact with fresh subs.
Read More:http://www.entrepreneur.com/article/245380?ctp=BizDev&src=Syndication&msc=Feedly

Time-strapped, budget-conscious B2B and B2C marketers can’t afford to make unwise choices with SEO and content marketing. These SEO tools and tips can help you make good decisions and use your marketing dollars well. Continue reading →

Before web developers add the newest bells and whistles to their designs, a team of researchers suggests they zoom in … Continued

The post Are websites that slide, zoom, and flip too fancy? appeared first on Futurity. 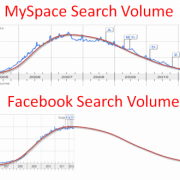 Remember MySpace? No? You are not the only one: apparently nobody else does (even though it did sell for a token price to a greater fool).

What about Friendster? Also no? Hardly surprising either.

Of course, both of these social networks are dead and buried, with Facebook gleefully dancing on their grave, a Facebook, or rather FB, which went public on May 18, 2012. A curious date we should note, because as we showed on that very day, the underwriters decided to go public just as Google Trends showed interest in Facebook was at its very peak.

So, where are we now? It depends who you ask. On one hand, according to the company, and the way it counts eyeballs, pardon Monthly Active Users, things have never been better, with some 1.441 billion MAUs, of which 210 million in just the US and Canada, or more than the entire employed population in those two nations.

What about earnings? Well, there too it depends which accountant you ask: one who believes that GAAP earnings matter, and that share-based compensation (whose proceeds are all too real and allow employees to buy any number of GDP-boosting products and services) is actually an item that should be counted toward one’s bottom line.  Or that they shouldn’t.

Because in the latest quarter, non-GAAP Net Income was more than double GAAP.

But the reason one can’t help but wonder just how much of FB’s "users" are merely robotic autoclicks and/or originate at various clickfarms somewhere in Asia, is that taking the Google Trends chart posted above, and refreshing it as of today, reveals something troubling.

That something is whether, despite the company’s loud protests to the contrary, that Facebook’s peak has come and gone, and what remains is the MySpace/Friendster inevitable supernova as Facebook’s easily distracted users go on to cooler, newer venues.

Luckily, there is an easy way to find out: if the company folds and admits the growth cycle is finished, and begins to repurchase its own shares courtesy of one of the few largely pristine balance sheets remaining, then it may be time to log off for good.