Blog
You are here: Home / Blog / Syndicated News / Think your annual bonus is pretty good? This Chinese startup is giving... 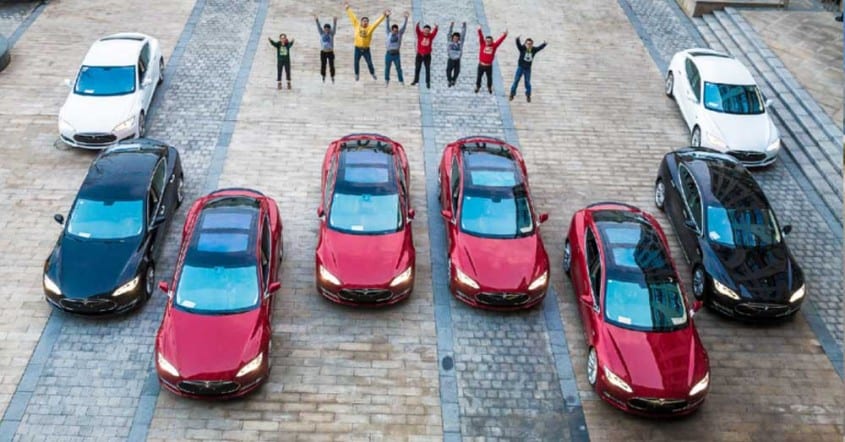 The Chinese lunar New Year is just around the corner. Around this time, expectations among Chinese office workers are high in anticipation of the traditional year-end bonus. For most workers, it’s a pleasant extra, not a windfall.

But what if the incentive for this year takes the form of a car — specifically, a Tesla?

It may seem like a daydream, but this is exactly what is happening to the employees of WiFi Master Key (our translation), a startup backed by Chinese game developer and publisher Shanda. The firm is handing out a surprisingly generous year-end bonus this year by rewarding every member of staff with more than four months at the company with a Tesla.

A company representative disclosed that dozens out of the fifty current employees will receive this reward, but declined to name the specific number. It will cost the startup more than RMB30 million (US$4.8 million) in total, at current prices (RMB734,000 for the Model S) in the Chinese market. The first batch of eight employees received the cars last week. The electric car manufacturer also confirmed the news.

Growing out of Shanda’s Innovation Institute, WiFi Key Master is a mobile app that automatically connects your devices to public Wi-Fi networks when in range. The app claimed more than 500 million users as of the end of September last year, and 230 million monthly active users. It claims to have free access to 120 million Wi-Fi hotspots across China.

“Talent is the key determinant for the success of high-tech companies. Through this move, we want to show how much we value and respect our talent,” said Chen Danian, the startup’s founder (and twin brother of Shanda CEO Chen Tianqiao).

In recent years, China’s booming Internet companies have given lavish year-end compensation to employees in a bid to keep them motivated, retain their best workers amid tough competition for talent, as well as to display the company’s exuberance.

This trend is led by the Chinese IT triumvirate known as the BAT (Baidu, Alibaba, Tencent). Baidu’s bonus pool hit a record this year, with one top performer getting a bonus equivalent to 50 months’ salary. One Alibaba employee showed off online, saying his bonus was worth more than 100 months’ pay. Tencent has yet to distribute its year-end bonuses, but it’s rumored that staff at its gaming unit received a 68-month bonus last year.

Internet companies topped China’s year-end bonus list with an average reward of RMB39,873 last year. Shanghai, Shenzhen and Beijing took the three top spots with average bonuses of RMB8523, RMB8235 and RMB7855 respectively, according to a recent survey by PXC.

This story originally appeared on TechNode.

US wireless carriers now legally have to unlock our phones